The reports say drivers were "forced to skip meals, ordered to urinate in bottles rather than stop for bathroom breaks, and advised to speed and not wear seatbelts to ensure they delivered more packages in less time."
Thursday, September 12th 2019, 9:37 PM EDT by Corey Vallas
Friday, September 13th 2019, 10:05 AM EDT 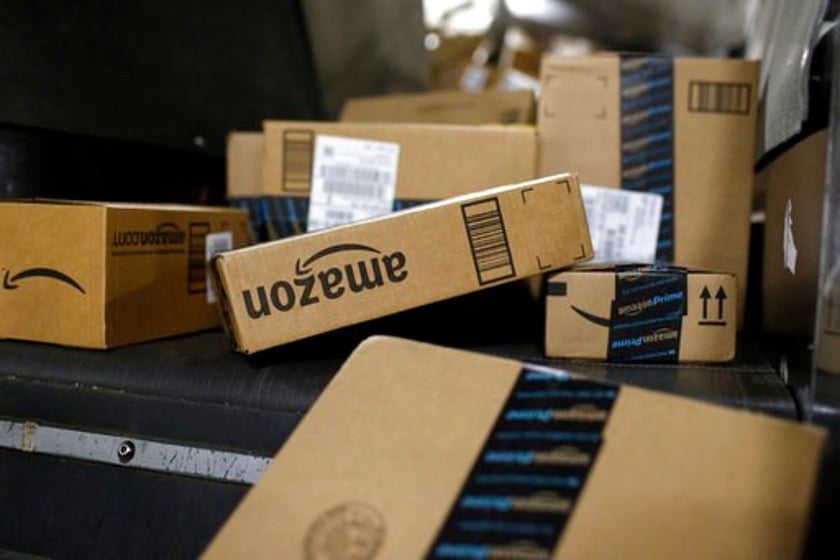 According to the release, BuzzFeed News, ProPublica and The New York Times reported on the company and their agreements with contractors that violate labor laws.

The senators demanded the company promote standards that protect its drivers and ensure public safety.

According to the BuzzFeed report, Amazon "divorces itself from the people delivering its packages" and "washes its hands of any responsibility" when delivery companies pass on Amazon's driver terms.

The reports say drivers were "forced to skip meals, ordered to urinate in bottles rather than stop for bathroom breaks, and advised to speed and not wear seatbelts to ensure they delivered more packages in less time."

"Amazon's evasive practices and moves to cut regulatory corners have not been without incidence," the senators wrote. "It is simply unacceptable for Amazon to turn the other way as drivers are forced into potentially unsafe vehicles and given dangerous workloads."

The senators asked for a response from Bezos by September 27.

The senators included these questions:

You can read the full letter below.

We write to express our concerns regarding numerous reports that Amazon's delivery standards are imposing unfair and dangerous conditions upon the delivery companies and the drivers who deliver its packages. Amazon should vigorously and proactively monitor the companies it does business with and ensure its contractors are adhering to labor laws and safety regulations. We urge Amazon to immediately cease business with contractors that violate labor laws and to promote standards that protect its drivers and ensure public safety.

On August 31, 2019, BuzzFeed News published a startling article detailing the inner workings of Amazon's delivery organization. According to the report, Amazon has created a system of deception – using a variety of underhanded tactics to skirt Department of Transportation (DOT) oversight and legal accountability for the treatment of drivers in its delivery network. Whereas competitors are required to adhere to safety standards set by the Federal Motor Carrier Safety Administration (FMCSA) – including training compliance and routine vehicle inspections – Amazon's network of third-party contractors allows the company to run its delivery service virtually unregulated.

Unfortunately, Amazon's evasive practices and moves to cut regulatory corners have not been without incidence. According to a joint investigation by ProPublica and The New York Times, there have been "more than 60 accidents since June 2015 involving Amazon delivery contractors." Innocent bystanders – as young as nine months old – have lost their lives and sustained serious injuries from drivers improperly trained and under immense pressure by Amazon to meet delivery deadlines. It is simply unacceptable for Amazon to turn the other way as drivers are forced into potentially unsafe vehicles and given dangerous workloads.

Moreover, Amazon has repeatedly claimed it is not liable for the conditions in which drivers work or the pattern of dangerous operating tendencies by drivers. However, it is clear that the aggressive managerial style Amazon forces upon the delivery companies it contracts with is a major contributor to the strenuous conditions drivers face and has led to a chain of worker abuse. In particular, delivery companies that do not fall in line to Amazon's demands can have their routes diminished, contracts terminated, or invoices unfilled. Fearful of retaliation, delivery companies pass on Amazon's unfair terms to drivers, who have reported being "forced to skip meals, ordered to urinate in bottles rather than stop for bathroom breaks, and advised to speed and not wear seatbelts to ensure they delivered more packages in less time." The relentless pressure created by Amazon's delivery policies raises serious concerns about the working conditions its independent contractors and drivers face – creating a system of worker exploitation and abuses.

While Amazon has continuously made claims that it treats its workers fairly and has "requirements for safety" in place, fines levied by the Occupational Safety and Health Administration paint a notably different picture: Amazon has a history of ignoring labor laws and fostering work conditions that are detrimental to the safety and basic humanity of its workers. Additionally, growing media reports, regarding Amazon's mistreatment of workers and failure to address lawmakers and agency concerns, are deeply troubling. Amazon's demonstrated lack of commitment to its workforce – whether on the road delivering its packages or processing orders in its warehouses – is contradictory to the policies that the company claims to have in place.

Amazon is a company that prides itself on technological innovation and big ideas but continues to struggle with basic standards of public safety and responsibility. Amazon's pursuit of larger profit margins, increasingly unsustainable delivery expectations, and methods to avoid regulatory and legal oversight are alarming. Further, we are disappointed by Amazon's repeated disregard for workers' rights and consumer safety.

With these concerns in mind, we look forward to your response to the following questions:

1. How does Amazon currently determine its contracts with third-party delivery companies? What safeguards are in place to prevent the company from contracting with organizations that have open lawsuits against them for unsafe working conditions? Will Amazon commit to ending contracts with companies that have violated labor laws, or have long and checkered track records?

2. How many delivery companies does Amazon currently contract with across the United States? How many of these companies have registered worker treatment complaints from their employees? Will Amazon commit to publically disclosing the delivery companies with which it contracts?

3. What steps does Amazon enlist to ensure its drivers and warehouse employees are treated fairly, according to the law? How often and to what extent does Amazon audit its delivery contractors and warehouses for compliance with labor laws?

4. Has Amazon ever taken any action to thwart the creation of a union? Does Amazon believe that its third-party drivers and warehouse workers should be able to unionize?

5. What training and qualifications does Amazon require of its drivers? To what extent is Amazon involved in the hiring, firing, and delivery oversight of drivers it independently contracts? How often and to what extent does Amazon audit its delivery contractors for compliance with transportation safety standards?

Thank you for your attention to this important matter. We respectfully request a response no later than September 27, 2019.