Oz and Toomey call on Fetterman to debate in Pa. Senate race

Republican Senate candidate Dr. Mehmet Oz is teaming up with U.S. Sen. Pat Toomey to publicly call on his Democratic rival in Pennsylvania, John Fetterman, to participate in a debate. 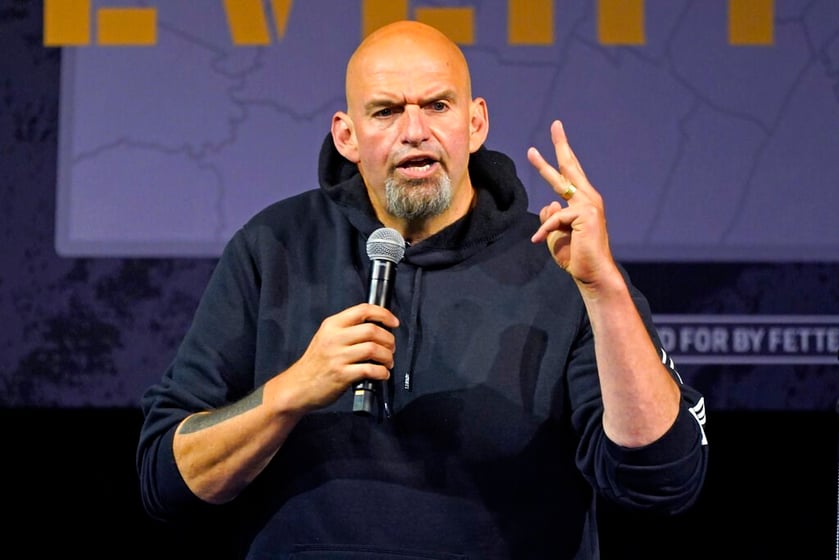 Oz and Toomey, holding a news conference in Philadelphia, also questioned Fetterman's fitness for office and criticized his reluctance to speak with reporters since suffering a stroke in May. Fetterman has been sidelined for most of the summer while recovering, though he did appear Monday with President Joe Biden at a Labor Day parade in Pittsburgh and has spoken briefly at a number of events.

“What happens if a U.S. senator in an important state like Pennsylvania is elected, never having answered a legitimate question from a voter, from a newscaster ... in a debate stage?” Oz said. “What would that mean for future campaigns around the country?"

Fetterman’s campaign countered Tuesday that Oz's insistence on a debate is “about mocking John for having a stroke" and maintained that Fetterman's doctor says he should be able to campaign and serve in the Senate without a problem.

“Anyone who’s seen John speak knows that while he’s still recovering, he’s more capable of fighting for PA than Dr. Oz will ever be,” Fetterman's campaign said in a statement.

The news conference with Toomey — the retiring senator both candidates are vying to replace — signals Oz's increasing aggressiveness in taking on Fetterman as the celebrity heart surgeon seeks to make up ground in polls with just nine weeks to go until Election Day. Democrats see the race as one of their best chances nationally to flip a Republican-held seat, and the winner could help decide the chamber’s partisan control next year.

Fetterman has only given three media interviews since suffering the stroke and has held no news conferences. He has acknowledged that he has diminished auditory processing speed — he cannot always respond quickly to what he's hearing — and conducted all three interviews by video, with real-time closed captions. Fetterman, in brief public speaking events, also has struggled to speak fluidly.

Oz, who has been endorsed by former President Donald Trump, has accused Fetterman of lying about the seriousness of the effects of the stroke. Fetterman’s campaign says he is not lying and is willing to debate, but they want a debate that can accommodate the lingering effects of his stroke. A campaign spokesperson declined to elaborate on what that might require.

Roughly a dozen news organizations and other groups have reached out to the campaigns about hosting a debate, Fetterman’s campaign has said.

Oz has touted his willingness to join five. The first one, proposed by Pittsburgh TV station KDKA, would have taken place Tuesday night. Fetterman's campaign told the station that Tuesday night didn't work.

The station’s news director, Shawn Hoder, said KDKA is still willing to host a televised debate at a later date and is awaiting word from Fetterman's campaign on when that might be. The station would need about two weeks’ notice to make a debate happen, Hoder said.

Besides any health concerns, political strategists suggest Fetterman could also be wanting to avoid a debate — or push it as late as possible in the campaign — because he is ahead in polls. Leading candidates often believe they have less incentive to join a debate and risk their opponent scoring points, especially considering Oz is a former TV show host.

“You have a whole heck of a lot more to lose, especially if you're John Fetterman standing on a stage two, three, four, five times with a guy who spent his life on television,” said Michael Manzo, a Harrisburg-based lobbyist and former Democratic campaign strategist. “It's almost a no-win situation for Fetterman.”

Fetterman's campaign did not respond to a request for comment on any strategy for avoiding or delaying a debate.

In any case, because candidates can communicate with voters through social media, debates are simply not as important as they used to be, or as substantive, said Mark Nevins, a Philadelphia-based Democratic campaign strategist.

In the Democratic primary, before he suffered the stroke, Fetterman skipped a couple of candidate forums, earning criticism from his rivals. But he also joined a couple other forums where — as the perceived front-runner in polls — he was the primary subject of attacks.

In particular, rivals went after Fetterman over a 2013 incident when he was mayor of small-town Braddock in western Pennsylvania and, shotgun in hand, confronted an unarmed Black man because he suspected the man was involved in gunfire nearby. Police didn't file charges against Fetterman or the other man in the matter.

In Pennsylvania’s last four U.S. Senate contests, debates have not been a major feature. All the debates took place in mid- to late October, with two debates in each race — except for 2012's contest, which had one debate.

Toomey — who won in 2010 and 2016 — said that if Fetterman is being honest about his condition, then he should debate Oz.