Ohio Democrats are using President Trump's own words to dramatize what they say are broken promises he made in Ohio. 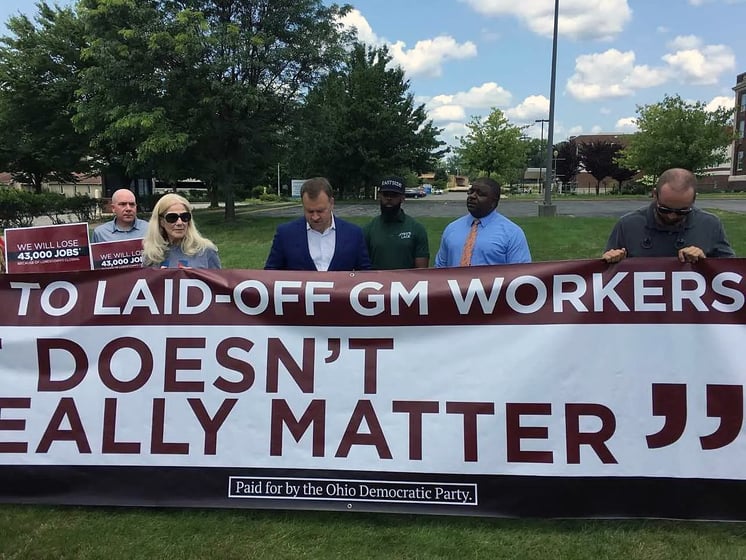 Ohio Democrats are using President Trump's own words to dramatize what they say are broken promises he made in Ohio.

State Democratic Party Chairman David Pepper stopped in Youngstown Thursday to remind voters of what the President promised during his campaign in Youngstown.

At a rally at the Covelli Centre, Pepper said Trump told a cheering crowd, "Those jobs are all coming back. Don't move, don't sell your house."

Pepper was joined by a small group of supporters who were holding a banner containing another Trump quote, "It really doesn't matter,"  after GM idled the Lordstown plant

The chairman was joined by Youngstown Mayor Tito Brown and a Lordstown autoworker, Braylin Ruston, who feels the President sided with big business and not the workers.

"When you ensure tax cuts for the wealthy and the corporate entities, that just makes it easier for those companies, such as GM, to make decisions like that to flourish, as opposed to helping working people caught in the grind," Rushton said.

Mayor Brown says while Trump made those promises in Youngstown he's done nothing since then. "This is a people issue. If you want to be the people's President, I encourage you to help Youngtown, Ohio and no more false promises," Brown said.

"And our point will be, we heard the promises too, we understand why some of you may have voted Trump because he said he was going to do this, that and the other, and in the last three years has he done those things? No," Pepper said.

But the President says it's the Democrats who are getting nothing done, while the economy is booming and unemployment is down.