Christopher Jester says evidence shows Ryan Lanzo was the passenger and was ejected through the sunroof and was caught between the roof and the grass as the vehicle was overturning.
Monday, July 12th 2021, 7:14 PM EDT
By Derek Steyer 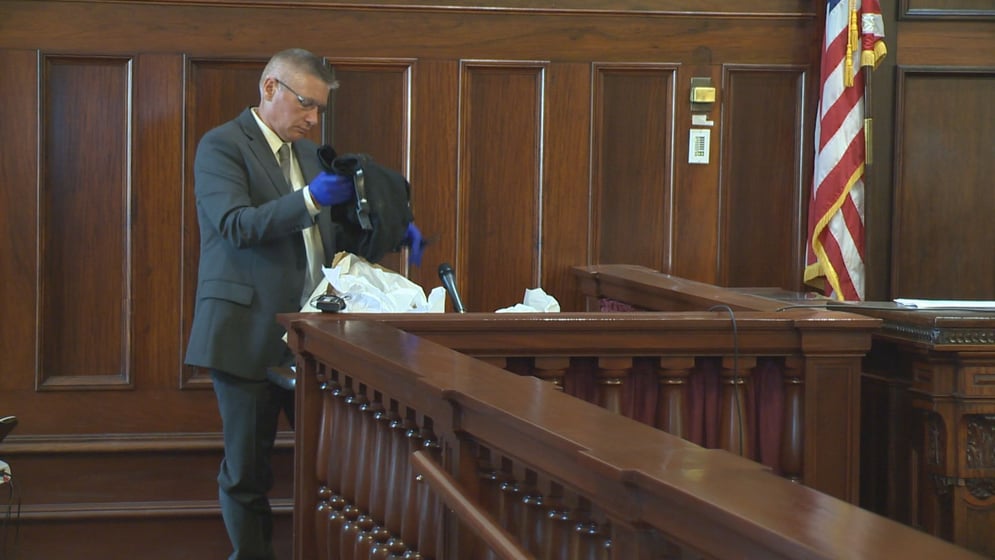 Testimony continued Monday in the vehicular homicide trial of Michael Malvasi II. Taking the stand for the prosecution was former OSP Trooper Christopher Jester, who handled the accident reconstruction for the deadly crash on November 18th, 2017.

Jester described the path the Mercedes SUV took when it crashed going around a curve on Shields road, piercing through a tree and rolling over multiple times.

"The tree was found 34 feet away and after the strike through the tree, the only tire mark remaining was from the right front wheel that continued through the impact," Jester said.

Jester then walked jurors threw all the photographs of the aftermath and the damage to the vehicle, both inside and out.

At issue - who was driving and who was the passenger. The SUV belongs to Malvasi's father and Malvasi is accused of being the driver, crashing and then going to get his father before returning and taking Lanzo's body to the ER and never calling police. During opening statements though, Malvasi said he did make bad choices, but he was not the driver.

Jester testified that the evidence proves there was an ejection and it was Lanzo, who was thrown through the sunroof after sitting in the right passenger seat.

"The evidence on the left leg is very similar to what we find on the sunroof corner to include the support bracket on there," Jester said. "Because there is no sod or grass stuck in this channel, that is good evidence someone was between the sod and grass and this vehicle at the time it was on its roof. I believe that Mr. Lanzo was caught underneath this vehicle and that the damage and injuries to his legs was as a result of that sunroof."

Malvasi is facing numerous charges including vehicular homicide, failing to stop after an accident, tampering with evidence and OVI.

Stay with 21 News for the latest on the trial.