Confident GOP unifies behind candidates once seen as risky

It’s been much the same in Ohio, where local officials have spoken out against Trump’s preferred Senate candidate, J.D. Vance, a venture capitalist who has promoted the former president’s election lies and underwhelmed as a fundraiser. 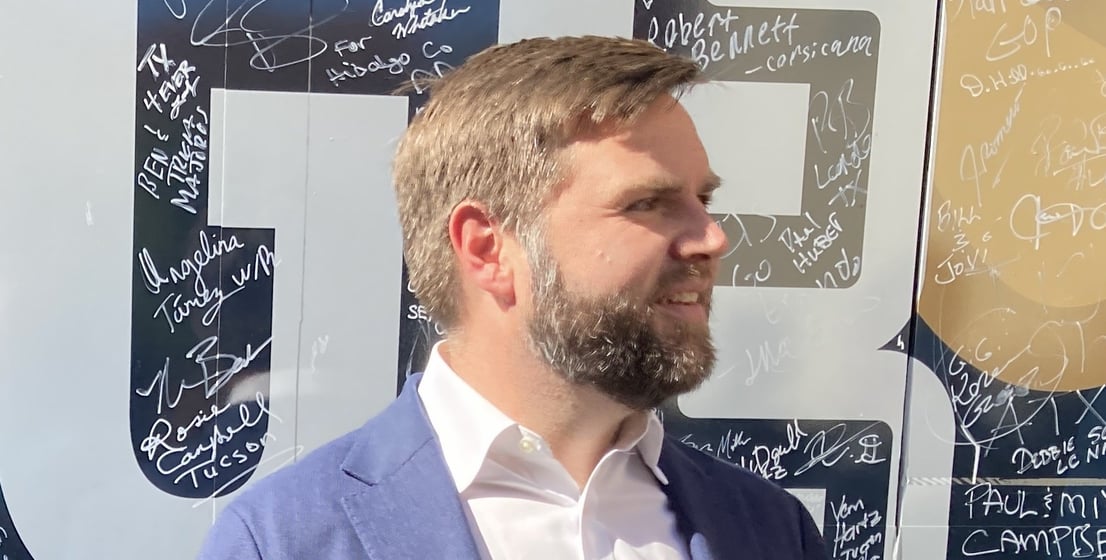 ATKINSON, N.H. (AP) — New Hampshire’s Republican governor described Don Bolduc as a “conspiracy theory extremist” just two months ago. But now, a week before Election Day, Gov. Chris Sununu is vowing to support him. And the leader of the GOP's campaign to retake the U.S. Senate stood at Bolduc's side over the weekend and called him “a true patriot.”

“I’m here for one reason, and that’s to make sure Don Bolduc is the next U.S. senator," Rick Scott, a Florida senator and chairman of the National Republican Senatorial Committee, told dozens of voters on Sunday gathered inside an Atkinson, New Hampshire, community center.

“Here's a guy who’s a true patriot,” Scott said as he introduced Bolduc, a retired Army general. "He served his country. He believes. He cares.”

The New Hampshire dynamic reflects the emboldened GOP’s increasing confidence in candidates who party leaders believed were essentially unelectable — or at least seriously flawed — just weeks or months ago. But heading into the final full week of the 2022 midterms, Republican leaders are betting that anti-Democratic political headwinds will supersede what Senate Republican leader Mitch McConnell himself called “candidate quality” issues in his own party.

Republican Senate contenders from Arizona to Georgia and North Carolina to New Hampshire are grappling with revelations about their personal lives, extreme positions and weak fundraising. Yet they may be in position to win on Nov. 8. Leaders in both parties believe Republicans are poised to take the House majority, with control of the Senate in sight as well.

At the same time, Republicans are waging competitive battles for governorships in swing states like Arizona, Georgia, Michigan, Nevada and Wisconsin.

As Republican optimism grows, Democrats have been forced into a defensive position with voters looking to punish the party that controls Washington for surging inflation, crime concerns and general pessimism about the direction of the country. Saddled by weak approval ratings, the leader of the Democratic Party, President Joe Biden, has avoided many of the nation’s most competitive battlegrounds for fear he would do his party more harm than good.

Biden is set to spend the night before Election Day at a rally in deep-blue Maryland. He'll travel this week to New Mexico and California, two Democratic strongholds where Republicans are threatening to make gains.

Former President Barack Obama rallied voters in Michigan and Wisconsin over the weekend.

“I understand why people are anxious,” Obama said in Detroit. “Moping is not an option.”

It was first lady Jill Biden, not her husband, who campaigned with New Hampshire Sen. Maggie Hassan on Saturday. The first lady called New Hampshire’s Senate contest “an enormous race” and encouraged volunteers to “dig a little deeper” and “work a little harder” in the coming days.

In an interview moments before taking the stage with the first lady, Hassan refused to say whether she wanted Biden to run for a second term when asked.

“How about we just get through 2022?” Hassan said. “That’s obviously his decision to make.”

The GOP’s embrace of risky Senate contenders has been playing out for months in states like Georgia, where $60 million will have been spent on television advertising to benefit Republican Herschel Walker by Election Day. That backing comes even as Walker confronts reports of violence and mental health issues from his past and more recent allegations that he paid at least two women to have abortions. Walker has denied the abortion allegations.

Masters, a 36-year-old venture capitalist, is now the GOP’s only hope to defeat incumbent Sen. Mark Kelly, a retired astronaut. Ignoring Masters' embrace of former President Donald Trump's lies about the 2020 election, former Vice President Mike Pence campaigned for the Arizona Republican recently and called him “one of the brightest stars in the Republican Party.”

In North Carolina, local Republicans have raised concerns about the strength of Trump-backed Republican Senate candidate Ted Budd. The congressman who has struggled to energize Republican voters in his campaign against Democrat Cheri Beasley, a former chief justice on the state Supreme Court. Local GOP officials openly criticized Budd for skipping a recent debate against Beasley, although over the last week Sens. Lindsey Graham of South Carolina, Tom Cotton of Arkansas and Ted Cruz of Texas campaigned with him.

It’s been much the same in Ohio, where local officials have spoken out against Trump’s preferred Senate candidate, J.D. Vance, a venture capitalist who has promoted the former president’s election lies and underwhelmed as a fundraiser.

Steven Law, a chief McConnell ally who runs the McConnell-aligned super PAC known as the Senate Leadership Fund, says that apparent flaws in candidates — including those who have railed against McConnell himself — are far less important than the party’s ultimate goal this fall: winning.

“At the end of the day, our focus is on winning the majority. And I feel like a lot of those concerns have faded into the background as we work toward that goal,” Law said in an interview.

Still, the Senate Leadership Fund shifted roughly $6 million it had planned to invest in the New Hampshire Senate race to Pennsylvania in recent days, suggesting it was essentially giving up on Bolduc. But just days later, the NRSC invested another $1 million — and Scott, its chairman, campaigned with Bolduc, sending the unmistakable message that the GOP stands behind the controversial New Hampshire Republican.

Over the weekend, a conservative group aligned with the conservative Heritage Fund invested another $1 million into Bolduc's candidacy.

Meanwhile, Bolduc continues to rail against Washington leadership in both parties as he wages an aggressive retail campaign across New Hampshire. In a brief interview before a Windham town hall on Saturday, Bolduc said he would work to replace McConnell and other Republican leaders if elected.

“The leadership on both sides have drug us into the mess that we see ourselves in. I’m the only candidate that says that,” Bolduc said. “It’s a Republican problem. It’s a Democrat problem.”

Inside the town hall, one Bolduc supporter mistakenly believed that Bolduc backed abortion rights. She sought to clarify his position as he shook her hand before taking the stage.

“I have a question,” said the voter, who declined to give her name. “Are you pro-choice?”

“I am pro-life,” Bolduc responded.

He added that he would not support a federal ban on abortion and instead prefers to let the issue be decided at the state level. That’s despite telling Republicans in Dover, New Hampshire, earlier in the year: “I’m not going to vote contrary to pro-life. I respect life from the beginning to the end.”

Sununu, the New Hampshire governor who Washington Republicans tried and failed to recruit for the Senate contest, addressed his change of heart on Bolduc during a Sunday appearance on NBC’s “Meet the Press.” In August, Sununu had dismissed Bolduc as “not a serious candidate” and a “conspiracy theory extremist."

“Don and I didn’t see eye to eye during the primary,” Sununu said. “But again, I’m going to support the Republican ticket because the issues that folks are voting on are inflation, gas prices, heating oil, which is skyrocketing here in New Hampshire and causing a major concern.”

Sununu was not asked about Bolduc’s repeated allegations of voter fraud in New Hampshire.

Bolduc has softened his tone since winning the GOP primary, but during a debate last week, he falsely claimed voters had been bused into the state to vote illegally. And when asked about the integrity of the 2020 election at a town hall earlier in the month, he said, “I can’t say whether it was stolen or not.”

Meanwhile, Hassan, a former Democratic governor with a massive fundraising advantage, acknowledged that Bolduc is waging a competitive campaign.

“Don Bolduc has been working really hard to conceal his extremism from the people of New Hampshire," she said. "He is the most extreme U.S. Senate nominee we have seen in modern New Hampshire history.”

Michigan Sen. Gary Peters, who leads the Democratic Senatorial Campaign Committee, predicted Democrats would retain their narrow Senate majority because of the sharp contrast in the quality of candidates.

“The Republicans have put up a cast of characters who are extreme and not ready for — not just prime-time, but any time," Peters said. “There’s not a red wave. And we will win. But these are going to be close races.”