Earlier this year, Greenville, in Mercer County, was hard hit by heavy rains. Homes were flooded, roads and bridges damaged. 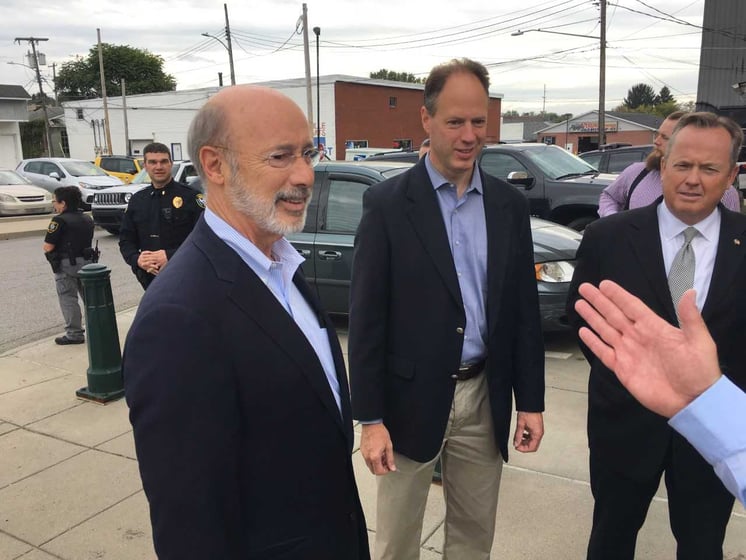 Earlier this year, Greenville, in Mercer County, was hard hit by heavy rains. Homes were flooded, roads and bridges damaged.

On Thursday, Governor Tom Wolf came to Greenville to talk about the challenges small communities face when trying to get disaster relief.  The Governor also used the visit to promote his Restore Pennsylvania Plan.

It was early June when torrential rains drenched Greenville, turning some roads into rivers. One road on the city's north end caved in, and the run-off flooded homes. Some had to be demolished.

Governor Wolf joined local leaders on a walking tour of some areas damaged by flooding. County and borough officials say there are too many restrictions from FEMA and the state to getting government relief when it's needed.

"Another funding source is always good because the ones that we have have so many restrictions tied to them. It's almost hard to use them at times," said Paul Hamil, Greenville Council President.

The Governor agrees that the threshold to qualify for funding is too steep and often leaves small communities to struggle on their own.
"You don't want to come to communities like this that need help and shrug your shoulders and say there's nothing I can do," Wolf told the crowd walking with him.

The Governor has proposed a plan involving a gas severance tax that he says could generate the type of funding needed to address these problems.

"It can't be a little bit here and a little bit there. It has to be billions of dollars because communities all across Pennsylvania are suffering the same kind of problems that Greenville is," said Wolf.

Pennsylvania is the only gas-producing state without a severance tax, and Wolf says his plan would generate $4.5 billion in new funding.

"We need this kind of money, and we need it fast because the weather is going to be producing floods all across Pennsylvania for the foreseeable future and we need to be able to help," the Governor said.

Republicans in Harrisburg have previously rejected a gas severance tax.  Wolf is offering his plan separate from the state budget.