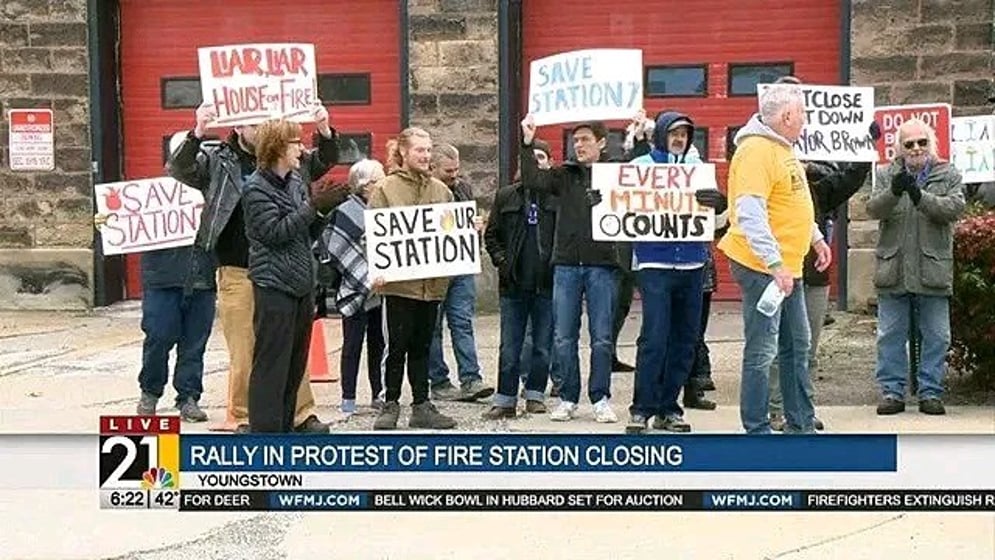 People living on Youngstown's north side are feeling vulnerable. They staged a rally to express their concerns.
The city's fire chief has announced a fire station on that side of town will shut down next year. But people living there and businesses investing there want a say.
They joined together at the site of a recent fire across from Wick Park, where two homes next to a vacant apartment building also caught fire. People say the two homes, one which was occupied next to the abandoned apartment complex that once stood at 208 Broadway, would have burned with a longer response time from another fire station and point out that a fire can double almost every 30 seconds.
About 100 people marched to Station 7 with signs. They chanted "Save Station 7," saying their message is for Mayor Jamael Tito Brown. They believe he is the one who wants the station closed and say the fire chief is just doing what the mayor wants since he was appointed by the mayor.
Youngstown's mayor and fire chief have said the city must close the station due to the city's finances.
The message people have is the decision is not okay with them. Protesters believe not enough has been done to try and keep such a critical fire station open. They were there to say their lives matter, their loved one's lives matter, and their families matter.
Rachel Parent said, "We are here to save our fire station and hold the city accountable. We want to know not only why they're closing this with minimum investment over the last decade, and what is their plan to save money to build a new fire station for the north side. They are saying it will never take another two minutes to get to this side of town, but all the major thoroughfare are connected with heavy traffic for business and YSU, so I don't believe that."
State Representative Michele Lepore-Hagan was there with her husband. They live on the north side. Lepore-Hagan emphasized, "It's access to the freeway, it is vital. The fact it is so close to the university all of the new apartments that are coming in, we really should be thinking of protection. And we should be supporting our brave men and women who fight to run into the fire to save our families and loved ones."
Holly Wallace said, "There are many families who have moved to 5th Avenue so we are getting back the population and now the city is going to thank them by closing their nearest fire station. I can't believe they are doing this without any input from anybody. They have not thought about construction projects. Once that thoroughfare is blocked from downtown construction, the times could be increased by three minutes, ten minutes, depending on the time of day. My worst fear is that someone is going to die in a house fire. We do pay taxes, and our lives matter."
The organizer of the rally, Jonathon Blackshire, said, "There has been no inclusion of the public; there's been no process for us to give our thoughts about the process, so no transparency. Had Station 7 been closed, we believe the occupied home on Broadway would have gone up in flames too. The home is next door to the apartment complex that caught fire.  The city says it's a done deal and that they have no choice in the matter, but we feel they haven't done enough to try and keep open a critical station for both the north side and for the YSU campus. We want Mayor Brown to know we are not okay with his administration's proposal. We want to see a negotiation that brings together leadership from the Youngstown fire department, city council, city administration, the mayor, and neighborhood stakeholders. We will be taking all of our concerns to the next council meeting on November 13th, and we encourage all of those who are concerned and would like to speak to sign up online."
That site is at https://youngstownohio.gov/request to speak before council.
The folks at the rally say they want real answers as to why station seven is being closed. They also want a comprehensive data-driven plan for all fire stations in the city, and they want transparency.
The protesters told 21 News they did not want to wake up one morning and find out another fire station has been arbitrarily closed with no data or research on the impacts behind it and without any input by the people who live there.