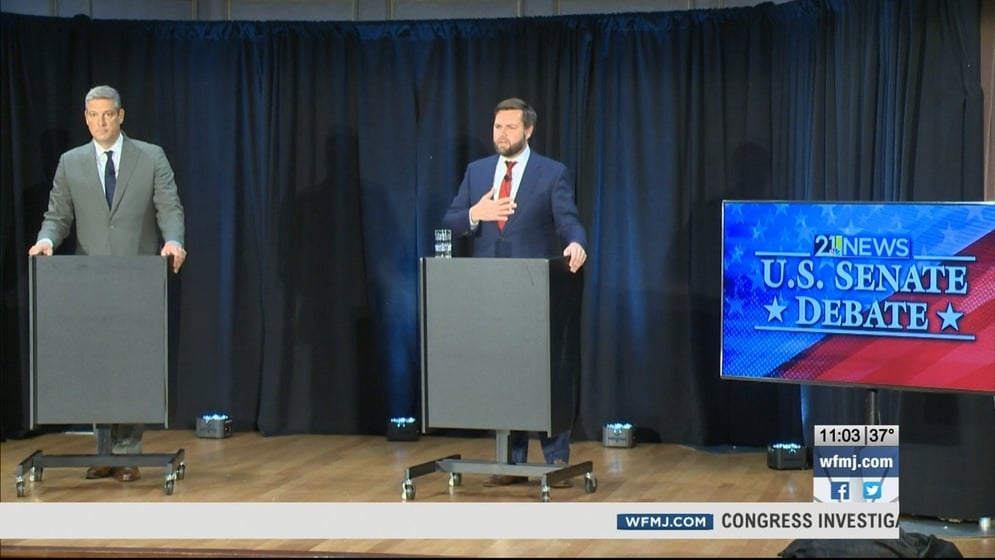 GROVEPORT, Ohio (AP) — Ruth and Boyd Boone are longtime Ohio Republican voters, eager to reelect their GOP governor. But when it comes to the Senate, they’re not so sure.

Both are skeptical of JD Vance, the venture capitalist and author-turned-first-time candidate who won the Republican nomination with former President Donald Trump’s backing.

“I don’t like him at all,” said Boyd, 80, who owns a farm outside of Ashville. “I don’t think he gives a blank about Ohio. I think he just thinks he’s going to be the senator.”

Both he and Ruth, 77, also said they like what they hear from Democrat Tim Ryan, the 10-term congressman running against Vance as a moderate — though they also have their reservations, including about his support for abortion rights.

“It’s going to be right down to the wire,” said Ruth of her decision, even as she picked up a yard sign for another Republican, Secretary of State Frank LaRose, from canvassers in a Kroger parking lot.

That ambivalence underscores a surprising dynamic in Ohio, where Vance is hoping to ride to Washington on a wave of national discontent with Democrats. Less than two weeks before Election Day, the race is more competitive than initially expected. While Vance may still win in a state that Trump carried by 8 percentage points twice, most polls show Vance and Ryan roughly tied, even as incumbent Republican Gov. Mike DeWine leads his Democratic rival by double digits.

Campaigning recently in a red and white windbreaker and sneakers, Ryan stressed his working class roots and cast Vance as an outsider and “extremist” more interested in notching a title than serving Ohioans.

But the Democrat’s blue collar campaign sometimes sounds like a broadside against his own party.

“We have got to get this country back focused on the stress that working people are under every single day,” he said at a union hall in Niles, where he grew up, peppering his speech with profanities. “I don’t give a s—- who you voted for,” he told the room of Democratic activists and union organizers.

Indeed, Ryan sometimes sounds less like a candidate for Senate than a doomsday prophet warning national Democrats that they are on the precipice of disaster if they abandon the working class voters who were once the heart of the party’s base.

“We will not be a national party unless we have the working class back on our side and that’s what this election is all about,” Ryan said, his voice straining as he stood flanked by labor leaders at P.J. McIntyre’s Irish pub in Cleveland later that afternoon.

It’s a message that has resonated with voters like Christine Varwig, 54, a Toledo school board member who said that Ryan speaks her “language.”

“He gets us,” Varwig said at a backyard union gathering in Toledo, where Ryan, a former quarterback, tossed around a football, sipped beer and played tug-of war. (He lost but won a re-match.) ”When he talks about his grandfather, it reminds me of my own grandparents, and so we can relate.”

But across the state, it was clear what Ryan is up against. On a recent weekday morning at 9 a.m., the Thirsty Cowboy bar in Republican stronghold Medina was packed with several hundred Vance supporters, fired up and angry, with cups of Dunkin’ Donuts coffee in hand.

“I think people are fed up,” Vance said as he railed against high grocery bills, rising gas prices and a porous border and blamed the country’s woes on failed leadership in Washington.

After sparking concern within the GOP for largely disappearing from the campaign trail over the summer, Vance has crossed the state with conservative firebrands including Texas Sen. Ted Cruz and Donald Trump. Jr. At events, he talks about being raised by his grandparents as his mother struggled with opioid addiction — a story he turned into the best-selling memoir-turned movie “Hillbilly Elegy.” And he revs up his crowds by lacing into Ryan, painting the congressman as a “complete fraud” who has tried to sell himself as a moderate but votes with President Joe Biden — a theme Republicans have hit hard in ads.

“My message is pretty clear: Tim Ryan has been in office for 20 years, ladies and gentlemen, he’s had his chance. Let’s send him back to Youngstown and force him to get a real job,” Vance said as he campaigned later that afternoon with Cruz outside the Spread Eagle Tavern in Hanoverton, where several hundred people had gathered on a crisp fall afternoon next to several hulking tractors.

The crowd included Lettie Davis, 63, who works at a local car dealership, where a life-size cardboard cutout of Trump greets customers but where business has suffered from supply chain issues and soaring interest rates.

“We love him,” she said of Vance. “He’s down to earth, which I really like. And he has a lot to offer from his past, with his mom and all that. So he’s like the rest of us.”

Trump’s decision to endorse Vance, despite years of Vance’s criticism, helped the novice candidate seal the nomination in a competitive GOP primary. That turned him into one of Trump’s earliest success stories, helping the defeated president cement his status as a GOP kingmaker. But it also sparked fierce local backlash from supporters of rival candidates, who urged Trump to reconsider.

East Palestine’s Peggy Caratelli, 64, who initially backed Vance rival Josh Mandel, said it took her some time to come around to Trump’s decision. But now she is fully onboard.

“So some of us were not very happy about (the endorsement.) But we figure Trump is smarter than we are. So there is a reason,” she said. “You know, (Vance) was an anti-Trumper. But he was very quick to explain why he felt that way and why he changed his mind.”

“I think he’s seen the error of his ways. We forgive him,” added Don Ridge, 65, from Winona, who said he sees similarities between Trump and Vance.

Ryan, in an interview after a long day of campaigning, said he was confident he would ultimately prevail, in part by winning over the kinds of Republicans and independents in the state who have long backed party moderates like DeWine and retiring Sen. Rob Portman but have soured on Trump’s brand. He’s hoping some DeWine voters will split their tickets and cast their ballots for him, too.

“They like the fact that I’m running as an independent-minded guy who’s willing to take on his own party,” he said of voters.

Vance is publicly dismissive of his opponent’s chances.

Through it all, Ryan has been largely ignored by the national Democratic Party as groups focus on defending vulnerable incumbents and flipping other Republican-held seats, even as Republicans have been pouring money into Ohio for attack ads against Ryan. That includes $28 million from the Mitch McConnell-affiliated Senate Leadership Fund from Labor Day through the election, and $2.4 million from Trump’s MAGA Inc. Super PAC, which is expected to continue spending in the state.

Ryan has his own robust fundraising operation and has actually outraised Vance. But the decision by the Democratic Senatorial Campaign Committee not to invest more in the race to date has left some Democrats fuming.

“If he ends up losing by a point or two, that’s on them, 100%,” said Chris Monaghan, 51, who works with sheet metal workers in Toledo.

“I personally think it’s shameful. ... We are so close,” said Varwig, the school board member who also works as an office manager at the Lucas County Democratic Party. She said that every day she meets Republicans who walk into the office and ask for Ryan signs.

But nationally, both parties sense that the dynamics are trending in Republicans’ favor. And the GOP is relying on voters like Kimberly Kell, 61, a software engineer from Groveport who was hoping to retire this year but has put off her plans because of her battered retirement savings.

Kell hasn’t been following local politics or the Senate race, but plans to vote Republican because she’s angry at Biden.

“The only thing I really follow is listening to the presidential stuff, which I could just choke on,” she said. She plans to vote, “all Republican, down the board.”