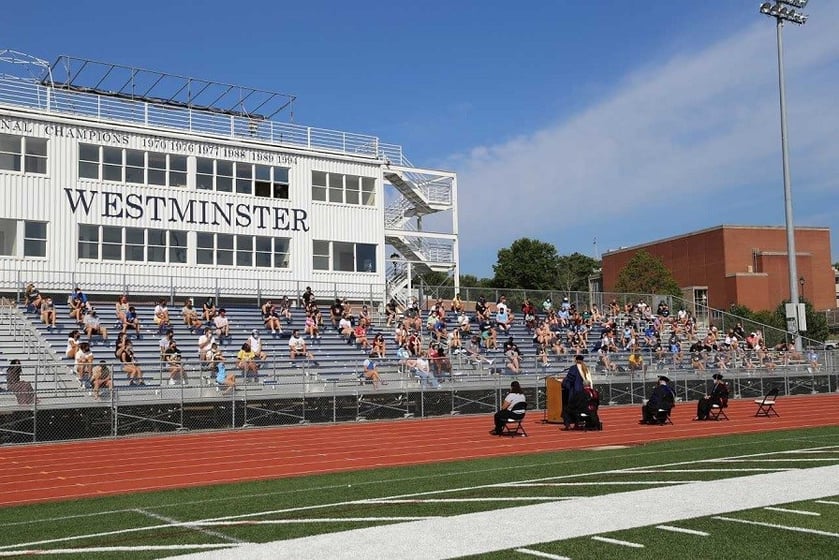 The inductees will be recognized on the field during halftime of the Westminster-Bethany football game on Saturday, September 10 which is scheduled to kick off at 1 p.m. The formal induction ceremonies will take place at dinner on Friday, September 9. Please contact the Department of Athletics (724-946-7307) for more information.

Below are the bios for each inductee:

Jim Dafler was a member of the Titan Athletics staff for 32 years, including 22 as the Director of Athletics. Under his leadership and guidance, Westminster became a landing spot for student-athletes all across the country to come and compete at world-class facilities. Dafler helped lead the construction and renovations of state-of-the-art facilities to further enhance the student-athlete experience and to provide as many opportunities as possible for all Titans to succeed. These top-level facilities include the UPMC Sports Complex, the Westminster Softball Field, the Westminster Baseball Field, and the Bill Rankin Indoor Golf Center. Dafler led the charge of adding four new varsity sport programs, including women's golf, women's track & field, men's lacrosse, and women's lacrosse – and the reestablishment of the diving program. He also assisted in the transition of Westminster's move from NAIA to NCAA Division II to NCAA Division III. Additionally, Dafler oversaw multiple renovations and improvements to Harold Burry Stadium and to the Memorial Field House (including the football locker room expansion and renovation, the Chet and Hilda Claire Student-Athlete Lounge, and the Dar Huey Heritage Center). During Dafler's tenure at Westminster, teams, student-athletes, and coaches have been recognized regionally and nationally, including numerous All-Americans, conference players of the year, scholar-athletes, conference championships, coaches of the year, and all-conference players. Dafler joined Westminster in 1989 as an assistant coach for the men's basketball team, later being promoted as the head coach, and became the Director of Athletics in 1999. During his coaching tenure, Dafler helped Westminster win five Keystone-Empire Collegiate Conference (KECC) titles and two NAIA Division I National Playoff appearances. For his entire head coaching career, Dafler was just four wins away from 200.

Caitlin Hosler Zavora '14, the only PAC Player of the Year in program history, was an All-PAC selection all four years - including All-PAC First Team in three seasons. Hosler was a key member in Westminster’s back-to-back PAC Championship teams (2012, 2013). She holds the career school records in both singles wins (71, primarily at No. 1) and doubles wins (75, all at No. 1). In total, Hosler earned eight All-PAC finishes in the PAC Tournament, including First Team (first place at the PAC Tournament) four times (2013, No. 1 Singles; 2012, No. 2 Singles; 2012, No. 1 Doubles with Alex Bailey; 2010, No. 2 Singles). In her PAC MVP season, Hosler was 20-1 in No. 1 singles (tying second-most in program history for singles wins in a season) and helped lead Westminster to a PAC Championship Title and advance to the NCAA Tournament. Her 20 wins in 2013 are tied for the second-most singles victories in a season in school history and are the most by a No. 1 singles player all-time. Hosler won No. 1 singles at the 2013 PAC Championship, the only No. 1 singles player in program history to win an individual PAC Title. As a junior, Hosler teamed up with Alex Bailey at No. 1 doubles to become the school’s only undefeated pair with a 20-0 record. In 2011, Hosler was 20-1 overall in No. 1 doubles with Bailey, tying for the most doubles wins in program history.

Ryan Pontius '98 was a three-time NAIA All-American. Named Team MVP, Pontius is the only player in program history to have the season lowest average score on the team all four years. His 76.5 average during his senior campaign ranks fifth all-time in school history. Pontius is tied for first in school history for a 36-hole total with a 142. He is tied for fifth in program history for most rounds of par or better. Pontius helped lead the team to four-straight NAIA Northeast Regional Championships. An all-region honoree, Pontius was a back-to-back NAIA Northeast Regional individual medalist (1996, 1997) and tied for first as a senior.

Elizabeth Schultz Fee '11 stifled hitters in the circle as she was a four-time All-PAC selection, including First Team in both 2010 and 2011 (Second Team in both 2008 and 2009). Schulz is a member of the highly revered PAC 60th Anniversary Team. Schulz was an All-Region selection in 2010, one of two pitchers in program history to be named All-Region; she had a 13-4 record with a PAC-leading 1.30 earned run average in that season. In 2010, her 13 wins, three shutouts and .211 opposing batting average all led the team. Schulz, the Team MVP as a senior, compiled a 2.39 earned run average (second on the team), tied for the team-lead with nine victories, and her 70 strikeouts also tied for team-lead in 2011. For her career, Schulz punched out 179 hitters, while totaling 30 victories, seven shutouts, and 23 complete games.

Jessie Szakacs '12, a three-time All-PAC First Team selection, is one of the best setters in school history. A member of the PAC 60th Anniversary Team, Szakacs has the second-most assists in program history with 3,309 - only the third Titan ever to have dished out over 3,000 career assists. A three-year starter, Szakacs finished inside the top-four in the PAC in assists in each of her last three seasons. Additionally, Szakacs was third on the team in service aces three of her four seasons, including second-best in 2009 with a career-high 43. Her 124 career service aces are the 14th-most in school history.